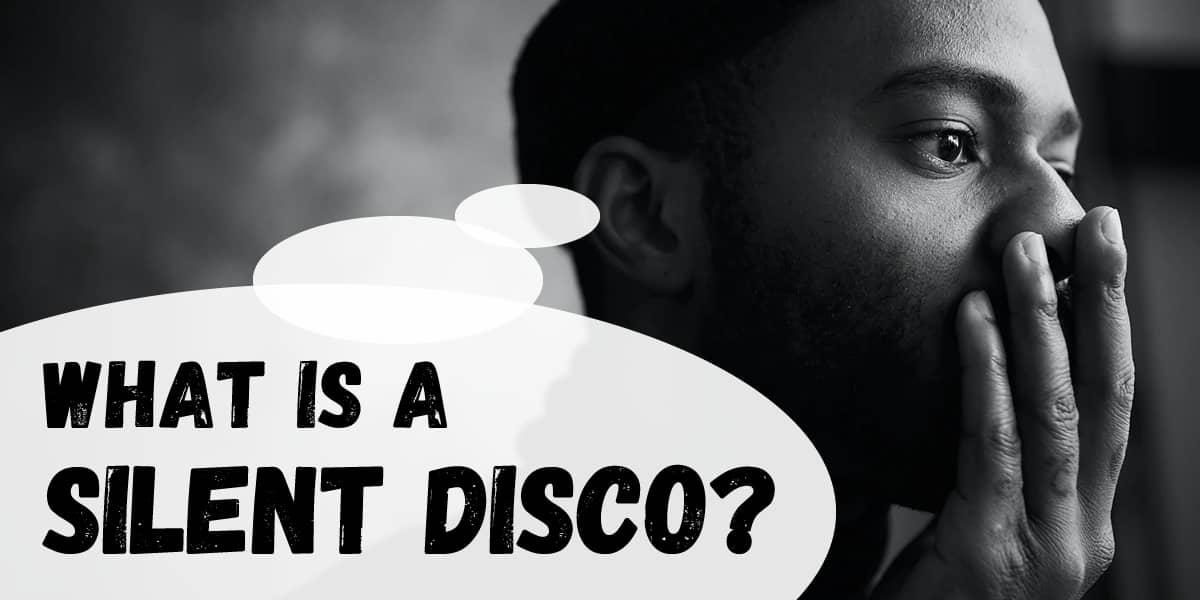 If you’ve heard all the buzz about silent discos and are now wondering “what’s a silent disco?” then this is the place to be!

We’ll go through a quick history, the equipment you need, why you should have one or experience one and how you can get super creative with them. Much more so than a traditional disco / party / rave.

Did you know one of the first silent discos happened in 1920??

Yep! Called a “Radiophone dance” people would huddle around a radio, all plugged in with headphones and listen to a band playing from across town.

The flaming lips that have hosted a “world first” headphone concerts back in 1999, but the first main one (with a DJ and not a band) was in 2002, where artist Meg Duguid hosted an installation in a museum, where a DJ transmitted their set to headphones. This was just one DJ set. The next year there were two DJs playing simultaneously, then up to three which is basically the norm for any silent disco.

What’s a silent disco all about? A quick overview…

Normally they are held in unusual locations, museums, art galleries, festival tents, your Nanna’s basement or used in a walking tour.

There are normally 3 DJs that play simultaniously and the music is broadcast to special headphones that easily enable you to switch DJs.

The headphones have LED lights on the side to indicate and correspond to a DJ channel. For example, each DJ will have a set color associated to them (red blue or green normally). You can tell which one you are listening to via the same color light on your headphones.

The headphones are usually really good quality to give you an intense personal music experience. Listening to music via headphones adds that intimacy and focus all the while you are all listening along with friends.

Having multiple music streams though adds the extra freedom to select your own adventure. Usually each DJ will focus on a specific genre of music, i.e hip hop, rock, pop, EDM, cheesy classics, the choice is all in the DJ selection.

How a silent disco works – a technical look

Basically, its like a very local radio. For example, a standard setup, there will be a transmitter that music sources are connected to. This can be a set of turntables or a phone with music on it.

Basically, this allows the user to switch to the music they want to hear.

Here at My Silent Disco Club, we do things a bit differently. We use internet to play the music and sync devices to the same spot.

WANT TO HOST YOUR OWN? Learn how to setup an event without any extra equipment!

Why are silent discos SO good?

Personally, my favorite thing about a silent disco is the choice of music.

Not into one DJ? Easy. just flick the switch around to something better. Or, if you suddenly see a lot of other peoples headphones switching to a different color to yours, follow the crowd as that channel is probably heating up!

Also, you can easily have a normal conversation with someone next to you. No more shouting and talking directly into someone’s ear!

The choice of location also increases. You are not making excessive noise (unless Bon Jovi or Roxette drop) so you can have house parties without annoying the neighbors. You can also have one at an art gallery without intruding on the folks going there for the exhibition. Its win win!

How can you host your own?

You have 2 options currently.

Option one: the traditional way

You can go through the process of hiring the equipment from one of your local silent disco rental suppliers. You can get packages of different amounts. The main cost is going to be how many sets of headphones you need.

You’ll also need a sound source. This can be a DJ or 3 or you could just go with some Spotify playlists on different devices.

This first option will set you back a bit of cash, but generally, you’ll be able to charge a small fee and break even or make some profit.

All you need to do is register for free, creating some playlists, then adding them to an event.

Check out: How to create a silent disco without rental equipment

Did you know you can now LIVE STREAM to the app?? – Find out how in this guide: How to stream to silent disco via OBS

Everyone that wants to join will just need to download the free app on either app store. They will then use their phone and own headphones to join in!

Above all, it’s super simple to use and a great and easy way to host an event, with out the stress of having to outlay a heap of cash.

Moreover, if you have an internet connection, you can have the event!

8 thoughts on “What is a Silent Disco?”